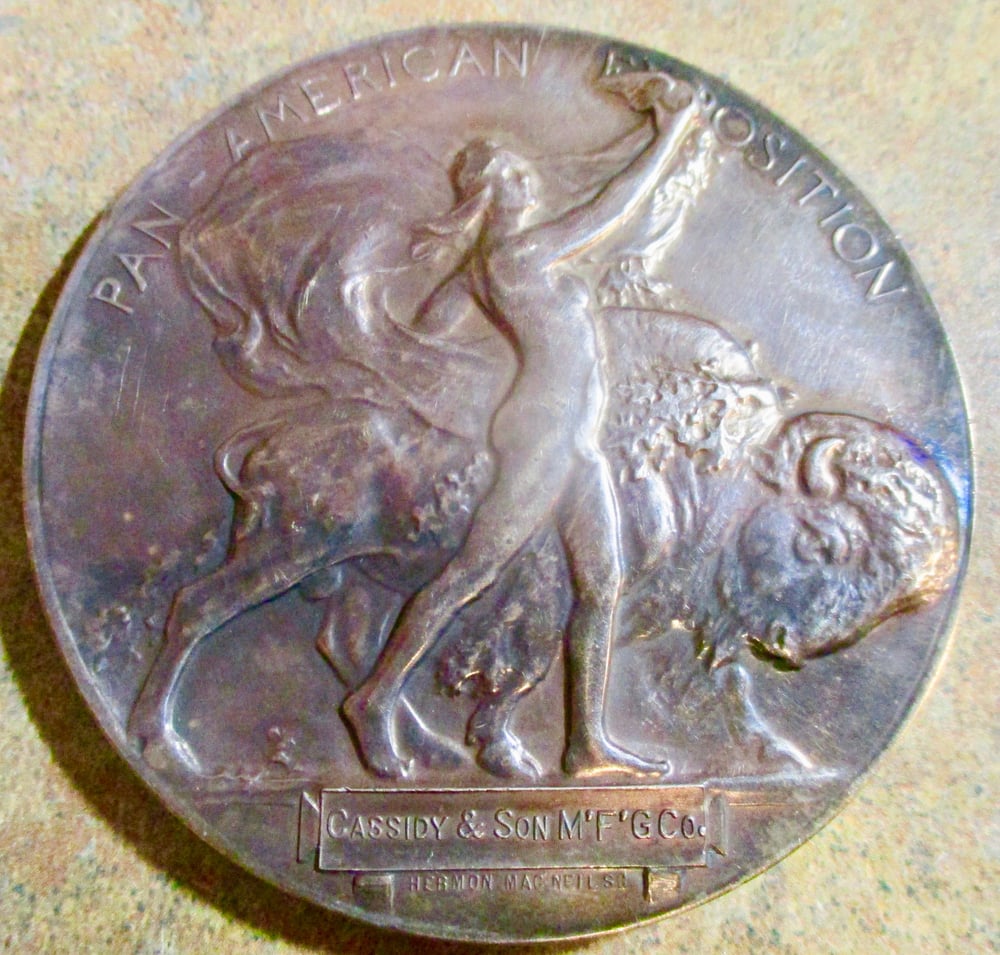 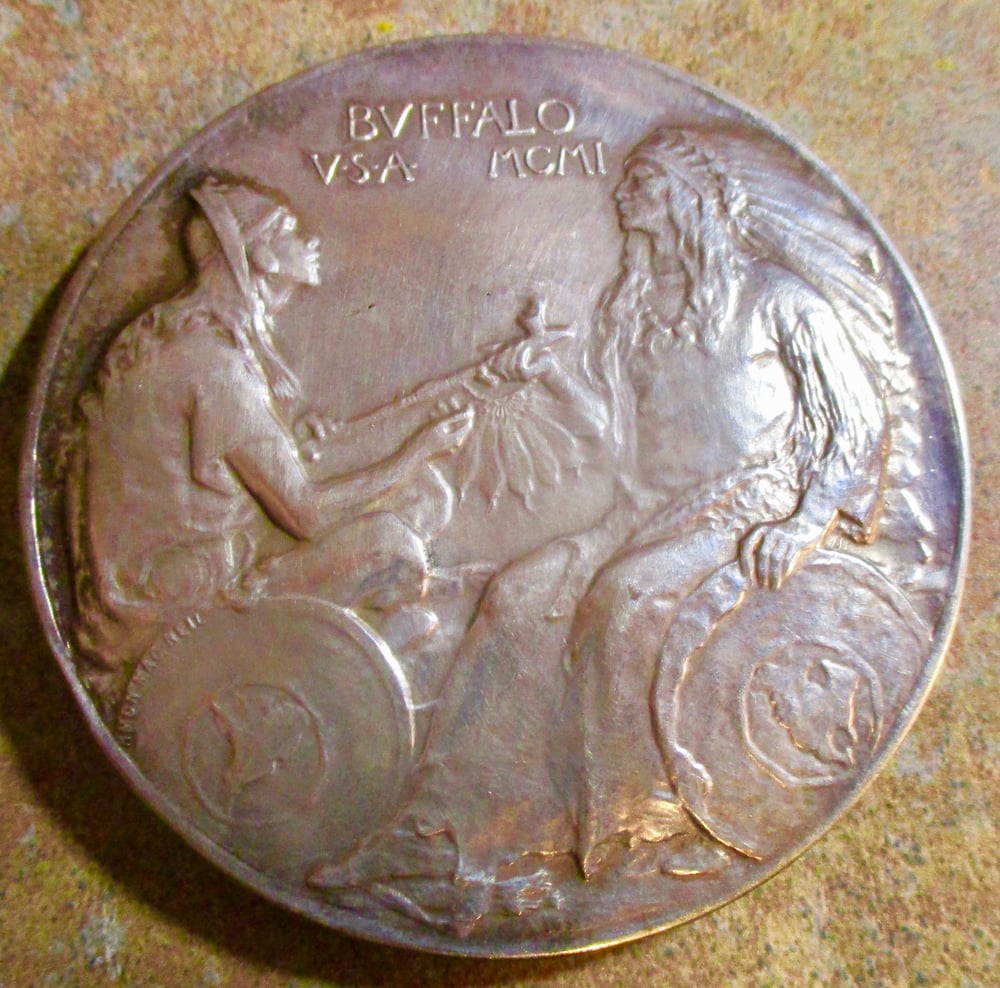 There isn't much one can say beyond displaying this medal, or on the other hand, perhaps there is a LOT to say about such an overwhelming medal.

This incredibly beautiful (that's the consensus, not just my opinion) silver medal is 63.5mm in diameter and was awarded in very limited numbers in 1901 at the Pan Am Expo in Buffalo. A bronze (not awarded) version is comparatively inexpensive (generally from $500-$1000 if/when you can locate one).

The medal was designed by sculptor Hermon MacNeil (1866-1947) who also designed the Standing Liberty quarter. Already quite an accomplished artist when he won the commission to create this award medal, he was only 34 years old at the time, the year before the exposition. As an artist he was hardly old at all (49 years old) when he undertook the quarter.

Since such award medals are awarded individually at world's fairs, there is not an opportunity for collectors to acquire examples as they would with a coin or non-award medal issue. But one would think that winning such an award would result in it being cared for and/or displayed by the winners. Still, fewer than ten of these have been sold in the last several decades (and it's also quite possible that multiple sales of the same piece are represented in that number).

According to auction and other records, the medals have typically sold in the $3,000-$3,500 range; I located on anomaly where an example sold for less than $2,500 and conversely one sold at $4,000+. Like so many medallic rarities it is almost impossible to assign a fixed value. Since this medal comes to market so very infrequently (as opposed to the abundant St. Gaudens Columbian awards for example) the "value" will be totally dependent on which--and how many-- potential buyers compete for it when one comes to market: It's perfectly logical to assume you won't see one in the next decade....or that one might "appear" tomorrow, as so often can happen.

As most collectors are aware, if you are fortunate to have no competition when you find a rarity the price might be a fraction of what it would be if two or more bidders WANT it! Condition is naturally a major factor but you can assume that most you see will be very high grades. Occasionally you may find a rarity that looks like it fell under (or into!) a garbage truck, but again, you can throw out (no pun intended) whatever amount such a piece fetches.

The distinct advantage of listing this and other pieces for sale here is that I'm free from the ugly Ebay fees. Even those fluctuate with a variety of options for listings and so on but it's fair to call it 15%. I am always selling for less in The History Bank Store than I can on Ebay; I try to pass along that savings to customers. Finally, find one in a major auction house for a steal at say $2300...or more likely $3,000, don't forget the buyer's fee, 29% in the largest of the auction houses, Heritage, down to perhaps as "low" as 20% in smaller auctions. That steal at $2300 at auction means you'll really pay almost $3,000 anyway. So many factors enter into each sale that you end up seeing the gross prices all across the board on very rare medals. And as you've here, just finding one for sale only starts the craziness. Who will happen to see the same auction, is condition identical or even quite close? What is the buyer's fee? And on and on.

I've lowered the asking price for this piece from $3145 to this $2699—and no 29% buyer's fee. The identical piece on Ebay will cost ME 15% for the "privilege" of offering it which I must factor in to any pricece if I offer it on Ebay.

This ultra rarity is part of an amazing collection of Pan Am items I have just begun selling. The bulk of the collection--virtually all substantial rarities--are documents, bonds, paper archives, photos etc. This is the only medal in the collection! Please conact me if you have interest in stocks and bonds or unique invitations. I've already sold numerous tickets and invitations but there is much more yet to sell.

I would urge you to contact me for details about the collection. If you have strong interest in the Pan Am and historical paper items you can't help but be excited once you have a chance to review the material.

You don't need to be a world's fair or award medal collector: This piece by MacNeil is a fabulous piece of numismatic/medallic art which would enhance anyone's collection.

NOTE: Shipping includes insurance for the full amount of the purchase.